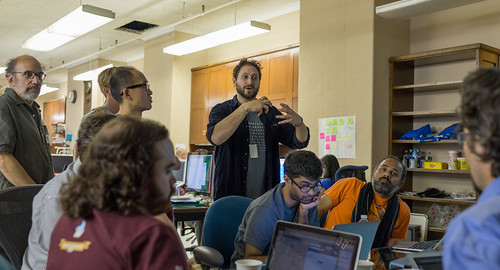 This week, the NYPL Labs held a small hackathon of sorts to look at, learn about, and work on some of their historical data and new APIs. It was a really great event that brought together some really great thinkers in the space. I thought, as my contribution to the event, I would write up a bit about my exploration of some of their data.

I choose to focus on two business directories from 1839 and 1854. I used these directories, plus a dataset of building footprints from 1854 to try to look for some interesting stories. One of the first maps I created was the one to the left, showing buildings that I could reconcile to people (based on not fully standardized addres fields in each directory) in either the 1839 directory, the 1854 directory, or both. By zooming out you can look at more complete picture of the data I was using.

Although simple, I still found it really interesting to look at some of the building notes. Here, I tried to parse out the notes as best I could into construction materials. The patterns across the city are really intersting. This data was originally created so fire insurers could assess risk for each house, so I imagine these notes were fairly carefully recorded. I drew the subtle red border around any building that had a comment with the word, 'hazard'.

This building on the corner is actually the Bridge Cafe. It is still around today and is the oldest wooden building in New York City, originally opening in 1794.

Of course there are many other buildings in the layer that still exist. Another interesting one is the Trinity Church (click to zoom) on Broadway. The church was the tallest building in New York in both 1839 and 1854, but it actually lost its claim in 1853 for just one year while the Latting Observatory was taller.

When hacking on the data, I quickly decided I wanted to try and track people that moved from one location in 1839 to another in 1854. Names alone were going to give me a lot of false positives when linking the directories for the two years, so I also started playing with the profession data. My assumpation was that profession in addition to same full name could be used as another way to say a person in one directory was the same as the person in the second. This still isn't going to be flawless, but it is can get us pretty close in some cases. There were a lot of John Smiths in 1839 and 1854!

Panning around this map is an interesting way to start thinking about what the neighborhoods might have been like. You see bankers and tobacconists sharing Wall Street, carpenters and various ship based professionals in what is today the Lower East Side and Chinatown, and grocers and tailors everywhere.

I was excited when I finally got this map to work, linking people from their 1839 location to their 1854 location. It really got my imagination going, thinking about what you could tell from peering into such a specific aspect of someone's life or business. If I had more time, I would have loved to pull this map apart more and used other NYPL and NYT APIs to start linking the data with some context. I did have enough time though to just peer into the lists of moving people and their professions. Depending on how much you trust Yahoo Answers, one company I found may have been the company that manufactured the dinner plates on the Titanic.

I looked carefully for people that were clearly the same across the years, with both distinct names and distinct professions. The favorite one that I found was John Stokell, a clockmaker. A quick search for his name led me to the information that Stokell must have been quite respected for his work. Just after 1843, Samuel Morse and Alfred Vail completed designs for two registers, the machines that would sit at either end of the first Telegraph line to be installed between Washington D.C. and Baltimore. It was Stokell, who was contracted to turn the designs into the two working machines. It makes you wonder, did he get paid well for this work? Was it amazing advertising for his clock business? Did his work for Morse lead him to move to a better business location? With time, I'd love to dig in more here and tell you the answers. For now, I'll stick to these fun exercises in data visualization and let you think of your own projects with historical map data.