The future of cartography wont be defined by you

The origin of CartoDB is a curious story, but it can be summed up nicely as a collective of environmentalists, technolgists, and designers that decided maps shouldn’t remain difficult to create just because old school software hadn’t been brought up to speed with modern technology. I’ve worked at CartoDB since the beginning, which has been, to say the least, a trip. One thing that I’ve learned, is that I will never learn enough. Or to say it another way, I never know quite what I’m talking about because what I’m seeing has never been talked about before. Nowhere is this lesson more apparent than in cartography.

Like many other fields, the cartography thing is changing fast. I like to point out how many other non-scientific and scientific fields have many times in their history gotten stuck in local optima. Dogma sets in, the optima sticks around as almost laws, and then some Indiana Joneseque hero comes in and shows that there is a taller mountain through the clouds. Entire fields change their text books, and the history of mistakes is sorta forgotten.

The dogma of cartography is certain to be overturned by new discoveries, preferences, and norms from now until forever. This is the second most exciting part about cartography, the bariers to engaging with the practice have recently been lowered to such a low threshold that a casual cartographer can now explore outside the bounds of comfort for traditional cartography. My bet is that the next Indiana Joneses and Katniss Everdeens come from that group of map makers.

Some early indicators at CartoDB

I was an early skeptic of Twitter Maps on CartoDB. I was pretty vocal that we needed to find ways to automate normalization, study the effects of color composition in animations, etc. We actually started work on some of these and I think that the outputs will be some new and interesting ways to deal with animation on maps. Externally too, a lot of interesting analyses have been published which help us think about the problem. I love it, that rush to understand something new.

A more recent story has provided a more critical review of Twitter maps, but in my opinion it gets caught in the belief that mapping and map makers must all share a single motivation. At least it prompted me to finally write this blog down. It has been in my mind a lot recently. Even in my recent talk at FOSS4G-NA I devoted some time to explain the rapid shift to world of flat UIs on the web and on mobile in a matter of months, thinking about that in the context of cartography. Cartography is more than just design, so I also devoted some time looking at the real intent and outcome of the Twitter map makers (among other CartoDB users producing curious new maps). In the end, I’ve changed my mind completely. I think the Twitter maps are spot-on and achieve their objective better than you can imagine.

Welcome on board the journey for the new world of cartography, your old world criticism has missed the boat.

I’ve thought a lot about this question actually. Let’s back up and look at Twitter in the World Cup. Here are a couple of graphics and quotes Twitter published and I’ve used in recent talks of mine. 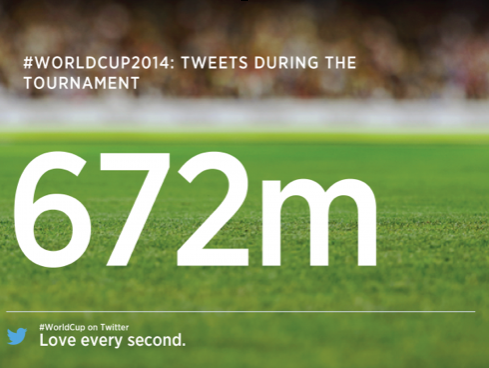 You see that? Big numbers. These big numbers are a great thing for Twitter, but a terrible thing for Twitter communications. What is 35.6 million? I have no idea, please tell me. I hope it is how many hate mails I get for this blog post. It is a problem shared not only by Twitter, but by other companies, scientists, and governments all the time. Now, let’s take a look at this map,

That is 32 million. Paired with a raw number, it is brilliant. Twitter is making no comment about relative activity from one location to another, or that the trends of tweets in the Ozarks indicate a strong German preference and possibly early settling. Nope. Nothing. They are communicating the impact and relevance of Twitter in an online and global conversation. I can see very literally what they mean when they say, 32 million. It’s a lot of damn tweets with a huge global impact.

Okay, I can tell from the tilt of your head that you think this is all a bit too handwavy for your quantified mapping practices. Well it is. I don’t have time for writing academic papers anymore, but others are working on it all the time and I think that over the next few years, to paraphrase Donald Rumsfeld, you’re going to find things that you thought you knew were not true and that there are other things you didn’t know that you didn’t know.

We are always in a moment just before the future of cartography. At this moment, map makers are no longer motivated purely by sharing a scientific understanding. The last couple centuries have shown us that map motivations often fall into marketing, sales, storytelling, design, and firefighting to name a few. The local optima discovered by the cartography of the past two centuries is being quickly expanded to fit the needs of a new generation of map makers or descended entirely to see if there are nearby slopes to ascend.

So what is burger cartography? It is what I’m going to start calling this exploratory playfulness with maps. I tweeted a couple weeks ago about a map I found, 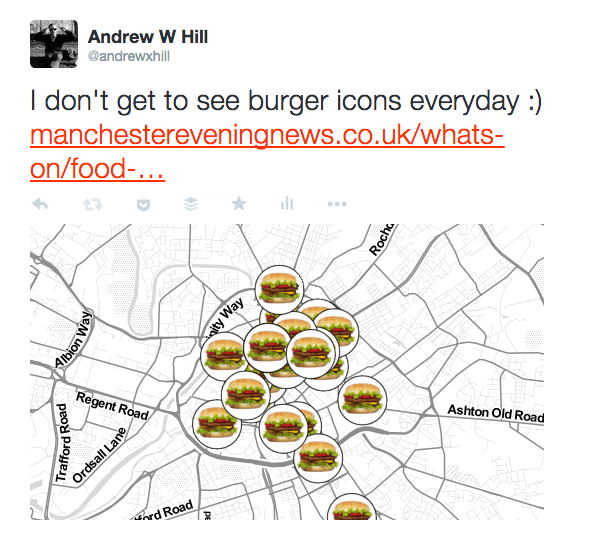 I’m sure that some people saw my tweet and were like, “Oh ziing, good one! Use markers and proper color composition or get off the map!”. But the tweet was genuine love for this map. It tickles me and makes me really think a lot about how our rules are temporary. I’m ready to learn.

Get ready to fall in love with mapping all over again!